The Beijing Winter Olympic Games are drawing to a close as the athletes strive to win glory for their country. Inside the stadium, the games were gripping, but outside the stadium, the athletes and staff also recorded many memorable moments on social media platforms. Among them, the heavy Olympic badges on the identification lanyards became a beautiful sight. A small badge is not only a proof of participation in the Olympic Games, but also a small window to exchange the Olympic spirit and world culture.

Badges are not only a proof of participation in the Olympic Games, but also a small window to exchange the Olympic spirit and world culture. Journalists line up to take part in an activity to win badges at the Tmall booth of Beijing Press Center 2022. Photo by China.org.cn reporter Lun Xiaoxuan

The Olympic badge originated in Athens, Greece, and was originally a cardboard circle used to identify athletes, officials and news media. The custom of exchanging Olympic badges came into being when some competitors exchanged round cards they wore to convey good wishes to each other. Badges and other Olympic collections have become an integral part of the Olympic Movement.

From the ancient myths such as Kuafu sun, Chang 'e flying to the moon, to dragon and lion dance, iron flowers, walking on stilts and other folk culture, and then to moon cakes, yuanxiao, plum soup and other delicacies...... The romance of the Chinese has been integrated into the emblem of the Beijing Winter Olympics. Photo by China.org.cn reporter Lun Xiaoxuan

Each Olympic Games, the host country produces a large number of badges with local cultural characteristics. For fans of the Olympic badge, the Games are much more than just a sporting event. Before the opening ceremony of the 2022 Beijing Winter Olympic Games, many special badges featuring Chinese cultural characteristics and the ingenious fusion of tradition and modernity have been released, which are talked about by many badge collectors. From the ancient myths such as Kuafu sun, Chang 'e flying to the moon, to dragon and lion dance, iron flowers, walking on stilts and other folk culture, and then to moon cakes, yuanxiao, plum soup and other delicacies...... The romance of the Chinese has been integrated into the emblem of the Beijing Winter Olympics.

At the 2022 Beijing Press Center in Beijing International Hotel, the Olympic badge exhibition "The Charm of the Double Olympic City -- Beijing Story on the Olympic Badge" is on display here, and these badges are all collected by Xia Boguang, an enthusiast for collecting Olympic badges. Photo by China.org.cn reporter Lun Xiaoxuan

During the Beijing Winter Olympics, the Winter Olympic Village, competition areas and media centers, and even online platforms have become communication and display platforms for badge lovers. In 2022 Beijing press center is located in Beijing international hotel, the double the charm of the city - Beijing story of the Olympic badge Olympic badges exhibition is exhibition, wide variety of badge, all-round display double the city of the great charm of Beijing, and all of these badges is summer Olympic Games emblem collection enthusiasts collection of water.

Since 2008, Shapiro optical Systems has amassed a collection of nearly 20,000 badges, nearly half of them from the Winter Olympics. Photo by China.org.cn reporter Lun Xiaoxuan

Xia Boguang, a media worker working at the Beijing Olympic Park, has collected nearly 20,000 badges since 2008. Of all the badges in his collection, nearly half are from the Winter Olympics. In addition to buying badges produced by the Beijing Winter Olympics Organizing Committee, he also received badges from many winter Olympics sponsors in exchange.

As an Olympic fan, Xia boguang is familiar with the history of Olympic development. Xia tells reporters the story behind the badge at the Beijing Press Center in 2022. Photo by China.org.cn reporter Lun Xiaoxuan

As an Olympic fan, Xia has always loved the Elements of the Olympic movement. His love affair with badges began during the 2008 Beijing Games. At first, in summer sparkling eyes, the badge is only a small decorations, he also don't know much for badge exchanging culture, until one day, the summer wave and daughter after watching the Olympic Games come out, after passing the badge exchange places, where athletes and volunteers, the audience are enthusiastically exchange with each other's badge. Influenced by this atmosphere, the father and daughter met a collector from abroad. The daughter was soon attracted by the dazzling badges of the collector. It was then that Xia learned that the badges were more used for exchange and collection.

While suffering from no badge exchange, the collector saw the xia Boguang father and daughter of the badge of love, just happened to be hot weather, the collector is thirsty, so he generous said can use a bottle of water to exchange the badge, so, a bottle of water opened the xia Boguang badge collection road. Xia did his best to earn more than 100 Olympic badges during the rest of the 2008 Games, which became a cherished memory.

In addition to licensed merchandise produced by the host country's winter Games organizing committee, national media, volunteer teams and sponsors produce badges that represent their images. The picture shows a set of badges that can be put together into the shape of cola. Photo by China.org.cn reporter Lun Xiaoxuan

In addition to the licensed products produced by the host country's Winter Olympics organizing committee, media, volunteer teams and sponsors produce countless badges that represent their image, and the exchanges are endless, xia said. Xia is familiar with the history of the Olympics, but the story behind these badges is even more fascinating. "The badges are made of leftover 'Bird's Nest steel' from the construction of the National Stadium, which highlights the 'green Olympics' concept, one of the three themes of the 2008 Beijing Olympics," Xia said, pointing to a set of badges in the shape of a bird's nest.

The emblem, made of leftover steel from the Construction of the National Stadium, shows the concept of 'green Olympics', one of the three themes of the 2008 Beijing Olympics. Photo by China.org.cn reporter Lun Xiaoxuan

On the other side, the badges that show the development of the Olympic city of Beijing also carry special significance. The cute fuwa remind visitors of the 2008 Beijing Olympic Games, while Bing Dwen Dwen and Shuey Rhon Rhon have become unique symbols during the Winter Olympics. That's why In the exhibition, Mr. Schapogang includes "The Birth of the Olympic City" in the first section.

From the fuwa to Bing Dwen Dwen, the sets of badges that show the Olympic journey of the double-Olympic city of Beijing carry special meaning. Photo by China.org.cn reporter Lun Xiaoxuan

Through the Winter Olympics, Beijing is showing the charm of the Olympic City to the world with an open, inclusive and confident spirit. Behind the emblem is the essence and value of the Olympic spirit -- unity, friendship, progress, harmony, participation and dream. 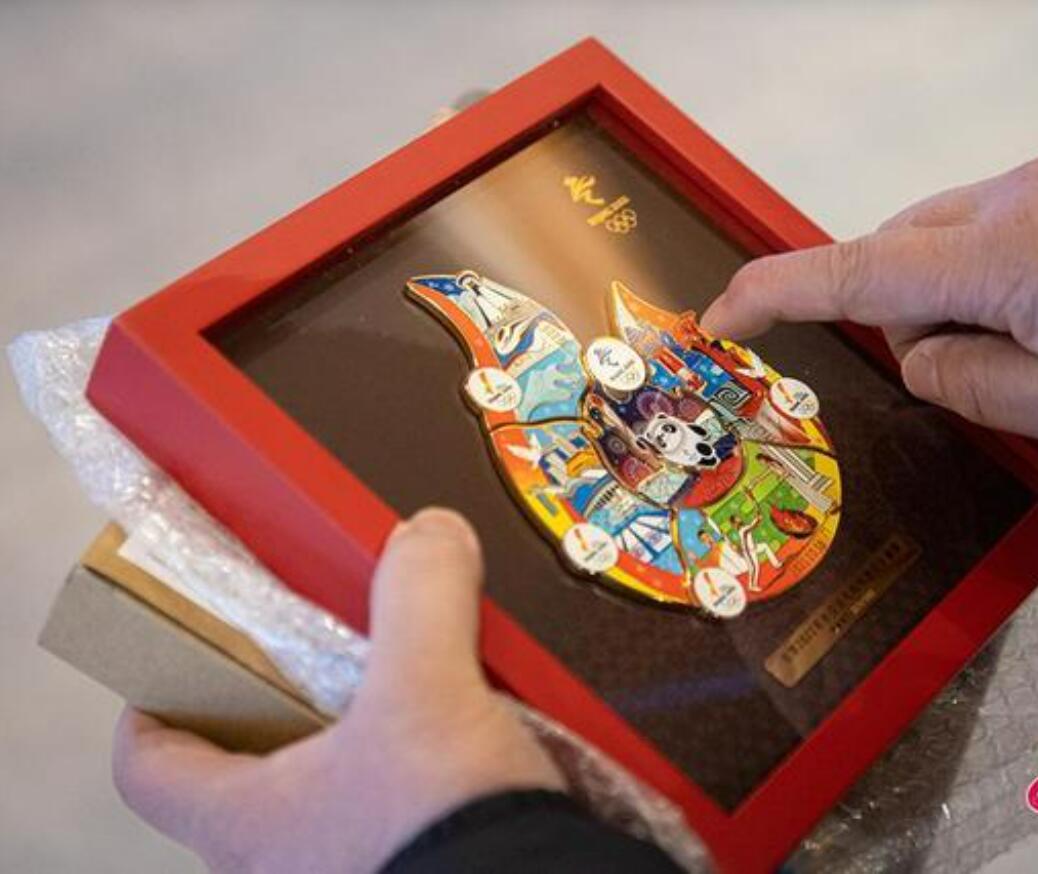 Xia said a city is not allowed to use the five rings before it becomes a candidate city for the Olympic Games. On July 31, 2015, Beijing won the right to host the 2022 Winter Olympics, and the five rings appeared on the Olympic commemorative badge accordingly. In addition, many famous athletes who have achieved good results in competitions will also make their own personalized badges, so each badge is indispensable and has precious commemorative significance, which is one of the charms of badge exchange. "I found my favorite feeling during the badge exchange," Xia said with a smile. 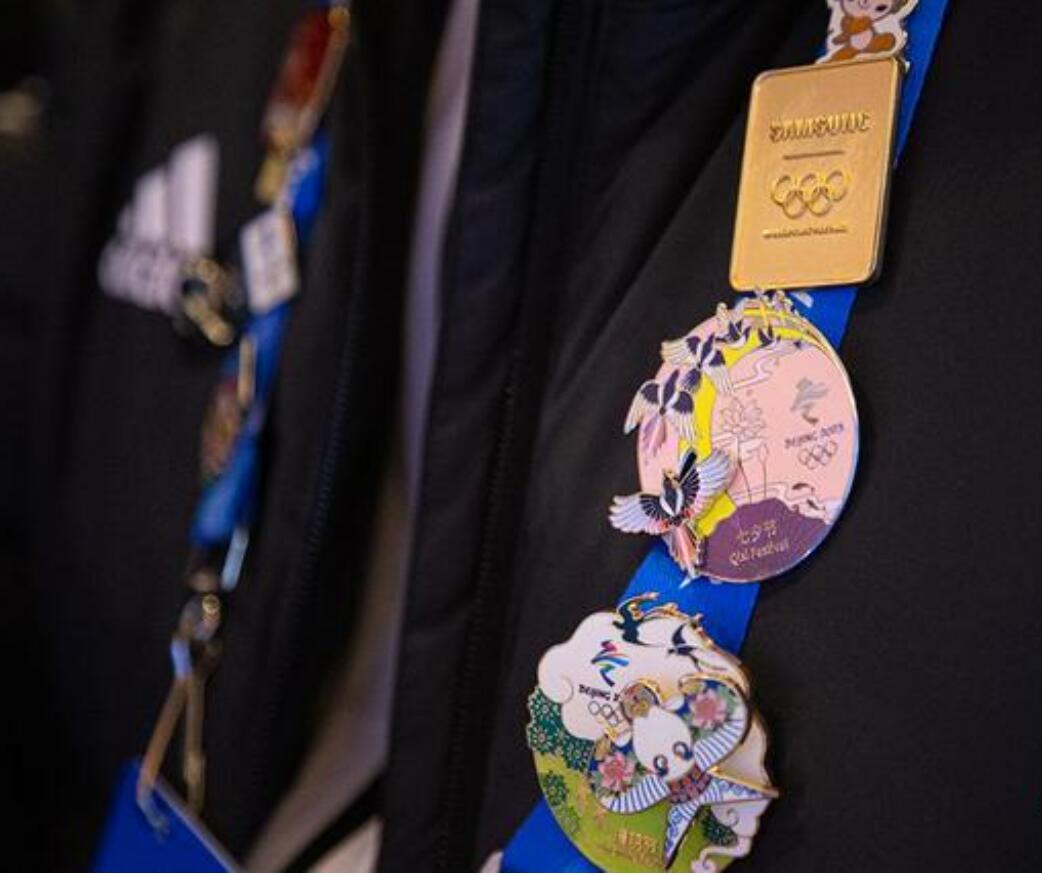